This is a review of the exhibition Margaret Preston – Art and Life at AGSA in 2006.

The Art Gallery of South Australia’s recent retrospective exhibition of Margaret Preston’s lifetime of work was certainly a large undertaking. Preston was one of a number of female artists working in Sydney between the wars in the modern style, though she combined it with a penetrating regard for the natural world.1 Margaret Preston’s life and artistic career proved to be a role-model for future feminists, but how fully was this revealed in Margaret Preston – Art and Life?

The most striking element of the exhibition is the sheer volume of work, filling three galleries, rather densely hung, and none of it on white walls. Instead, the yellows and reds on which the works are displayed lend them a warm and inviting quality. The vast number of works featured span her entire career, and are displayed chronologically to demonstrate the development of her artistic practise. We start with some of her still lives, such as a bowl of onions, and quickly move into paintings of flower arrangements. These were to become the iconic images that defined Preston’s work, and the second gallery features them almost exclusively. Here we find the realisation of Preston’s modern style, using painting and woodblock to create strong areas of flat colour in image after image of Australian native flora arrangements. We end in the last gallery with many of her landscapes and more indigenous inspired artworks.

Despite the large amount of work on show, there were only a few paintings that demonstrated Preston’s deeper political motivations. One such painting is Japanese submarine exhibition (1942, pictured right), which stands out amongst all the flowers. It depicts a dismantled submarine on display by the seaside. There are war ships in the ocean in the background and a soldier standing casually in the foreground. There are none of the bright colours found in Preston’s flora, and the painting is executed in rough, simple style. Catherine Speck suggests the childlike presentation of the submarine may have represented Preston’s belief that warfare was an immature way to solve international conflict.2 In fact the signs in the painting resting up against the displayed submarine speak directly to the viewer about warfare in general, saying ‘Do Not Ask Questions’. This is a pointedly political painting, much like many of Preston’s other works not featured in this exhibition, which show “war as inverting the everyday”.3

Preston’s politics extended to a deeply felt nationalism.4 Preston was one of the first Australian artists to attempt to engage with indigenous imagery as a means of creating a uniquely Australian art form. Her well known 1928 Aboriginal Flowers was on display, along with some examples of abstract designs she created, inspired by indigenous designs. There are also some unusual paintings from late in her career of aboriginals in biblical situations, such as a Garden of Eden, full of Australian flora and fauna. These works seem quite out of keeping with the rest of Preston’s practise, yet there is little information given to place these works in the context of her previous work or her political beliefs. 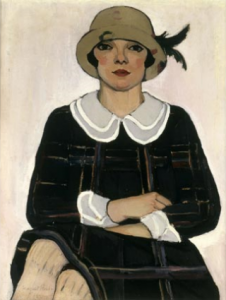 One particularly noteworthy image is Flapper, painted in 1925. (Pictured right) The woman was Preston’s maid, Myra, and though she is clearly an attractive woman, Preston here is aiming to capture something other than beauty. Reflecting her woodcut work, the image has had extraneous detail pared away to create a very modern style of bold, flat areas of colour.5 Myra gazes straight at the viewer, full of confidence, an intelligent woman assured of her contemporary outlook. The painting demonstrates explicitly Preston’s feminist ethos, one of the fundamental aspects of her career success.

Margaret Preston was a strong and dominant personality, ‘a force to be reckoned with.’6 Yet this exhibition presents the viewer with a twee cacophony of flowers and landscapes, which are all very attractive to look at, but can hardly be said to do justice to the exemplar and empowering career Preston had. Instead the exhibition simply promulgates the idea that female artists just painted flowers, and that their concerns were primarily domestic and aesthetic. Certainly the amount of work on show was vast, but it has failed to capture the invigoration and determination that fuelled Preston. There were undoubtedly many sales of the numerous posters available of pretty flowers, which could hang easily and without challenge in many a home, but what would Preston, ‘a self-proclaimed enemy of the dull’7 have made of such a conservative retrospective?