Adelaide is fortunately a rather safe city. However, you could still find your delicate sensibilities accosted if you were to wander into one of her alleyways on a dim night. There you might find a drunken youth or art-scene reveller urinating in desperation against a wall, or worse still, you might witness some graffiti. The street art that is splashed up in Adelaide’s nooks and crannies is modest at best, mild in comparison to the competitive bravura of graffiti in a city like Melbourne.

Consisting primarily of car-parks and the backsides of buildings, Liverpool Street in Adelaide’s north-west really qualifies more as an alley then a street. It is no surprise to find that the small warehouse-like space of Liverpool Street Gallery is hosting an exhibition of ‘street art’ by South Australian artist James Dodd. His works, which have previously strewn across entire walls at the Experimental Art Foundation, hang discreetly and prettily in the cavernous, rough-hewn gallery. The small panels and canvases, some sitting quietly on shelves, don’t bludgeon you like many works found on the street. Rather, the yellow, orange and pink tones draped behind black silhouettes of palm trees, foliage and graffiti all hint at a hazy, afternoon, surfie culture. With the pseudo political terms dotted through them, the pieces nudge into the ideas found in the work Scott Redford. Yet, where as Redford’s works attack the slickly commercial Brisbane beach culture, Dodd’s are more about capturing the simplicity of Adelaide’s modest graffiti, the beauty of our small, hacked-out transgressions. 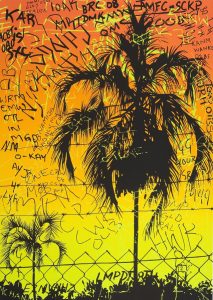 The paintings appear to be created by masking out certain parts of the image on the neon pastel backgrounds, then painting over them in black. While this is true for some elements, the actual process is far more painstaking. The cut-out areas of colour that show through the black, predominately rough-edged graffiti scrawl, are not masked off first, but instead carefully painted around. Dodd is guided in this delicate painting by the use of projected images from his own private collection of graffiti photos, a collection that spans far broader then just Adelaide. There is insight in the revealing circularity of his work – private motives became public expressions as graffiti, which became private images in his collection, which in turn became public works of art, only to become private images again when they are eventually bought. Private, public, private, public, private again. It’s street art grappling with its own worth as more than just aesthetic as it traverses public and private spaces.

As Dodd will tell you, when street art is moved into a gallery, it loses a lot of its inherent significance. Some people get that transition, other people don’t. Yet the vogue for purchasing street art continues unabashed, with buyers conveniently ignoring the importance of context. This importance of context is a concept we should all be familiar with by now, given that Marcel Duchamp illustrated it so outrageously nearly a century ago, when he placed on exhibit a urinal, unaltered from manufacture other than to be signed R. Mutt. Entitled Fountain, it was a demonstration that meaning can be, and perhaps exclusively is, derived solely from context. Yet the graffiti works that hang on expensive gallery walls across the world seem too cleverly ironic to concede they may have lost something in the process of being ripped from the streets. Graffiti is a vital and important art form because it rails against the corporatisation of public space, clawing it back for the common person. This vast value of graffiti is demonstrated when people pay millions of dollars for a Banksy, yet in doing so they simultaneously also undermine something essential in it. Street art is communally owned, it is free to look at and free from the filtering of commercial taste. Dodd’s work muses on these ideas in a quiet way, taking humble, egalitarian scratches and elevating their inherent beauty. Perhaps we should heed Duchamp’s assertion about the aesthetics of the urinal and head into the alleys ourselves to witness street art in the way it was always intended to be seen.