This review appeared in Issue 66 of Filter magazine, published by the Australian Network for Art & Technonolgy.

Wandering into the bright Brisbane sunlight, we enjoy a moment of mental refreshment that the open air brings. A diverse group, equal parts ‘arty’ and ‘techy’, all keenly focused on the task at hand and infused with a vague sense of anticipation.

Meandering across a vacant lot, huddled around a little black plastic box spilling coloured wires, we shade our eyes from the brilliance of the sun hoping a tiny red light in the box has come on – but no. Back and forth we traipse. Maybe the tall university buildings are interfering with the signal. Lets try over there. Suddenly, it flashes, a brief glimmer, but unmistakably there. The GPS is working! The red light only comes on once more, but its enough. The group relaxes, eases back into the casual banter, a sense that some small achievement has been made. 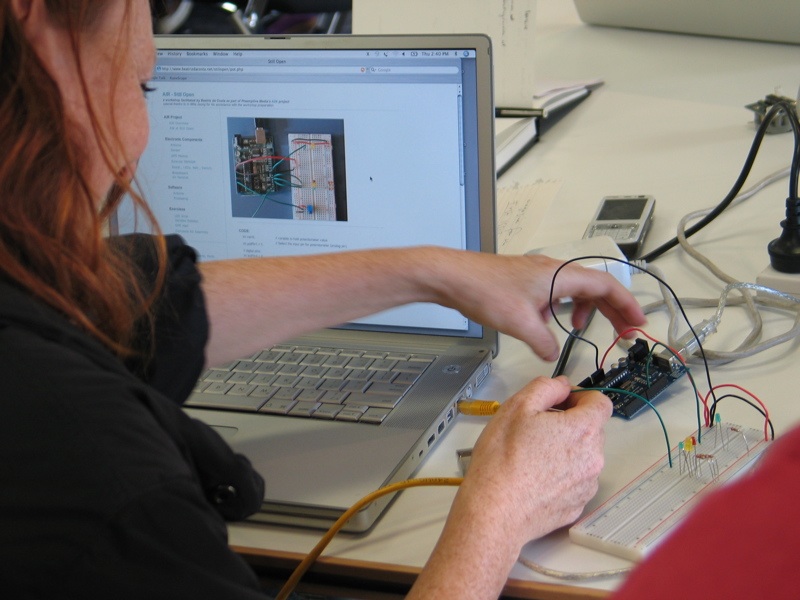 Annemarie Kohn with the devices at the still/open workshop. Image by ANAT

It is late afternoon on the first day of the Brisbane leg of ANAT’s still/open emerging technology lab. For the past few hours participants have been in a computer lab at the Queensland University of Technology, receiving a crash course in basic electronics from Beatriz Da Costa, who has carefully guided them in the construction of these little black boxes. They are individual pollution sensors, built entirely from Open Source software and hardware, utilising a mobile phone SIM card to locate pollution readings and transmit them back to the web. It’s a complicated piece of technology, particularly with just one afternoon to built one and no prior knowledge of electronics. Yet, it has been possible to achieve something, thanks to the open source approach. It’s not simply the ‘free’ and ‘open’ hardware and software that is responsible, but the open source ethos, that more can be achieved by working together. Everyone has, naturally, fallen into a role within the groups, contributing what they can, when it is needed, without the need for a leader or organizer. With no one specifically in charge, the pressure is off any one person to feel responsible for the device working (or not). Without the onus on individual success, everyone seems more at ease, more willing to make suggestions that might not work, to simply contribute whatever they can. It’s remarkable how effective this is.

This approach is by no means new in the world of artistic production, where collaborative creation has been happening for years. However new technologies have enabled the expansion of an open source approach to larger, more complicated creative undertakings. The results can be impressive and inspiring, as with the short 3D animated film ‘Elephants Dream’ 1. The film is a surreal, slightly sinister fantasy, populated with sumptuous visuals, inventive effects and two enigmatic characters who intrigue us through the story, but ultimately leave us with more questions then answers. Produced democratically, all creators had input into the story, style and identity of the film. Purely open source software was used to create the film, and when the software was lacking a necessary functionality or special effect, a call was put out to the open source community of programmers on the net. Generally the solutions came back fast and effective. The film has been released on DVD along with full versions of the software and audio/visual content it was created with, so that viewers can remake it to their liking (perhaps making their own meaning from it), or recreating as their own work.

The loss of authorial control over the end meaning of their work can leave many artists reticent about the open source approach. Open source is about more then just legalities of copyright and access and the chance to create something new from the work of others. It’s also about recreating, reimagining and repurposing the culture around us. It’s about allowing judgement to be passed on the quality of a work by consensus not critique. For a generation of artists and audiences who have had to create their own meanings in the world around them, nothing could be more exciting.

Elephants Dream is a computer-generated movie made using open source applications that premiered on March 24, 2006. Beginning production in September, 2005, it was developed under the name Orange by a team of seven artists and animators from around the world. It was originally known as Machina, before being changed to Elephants Dream to more closely match the storyline.